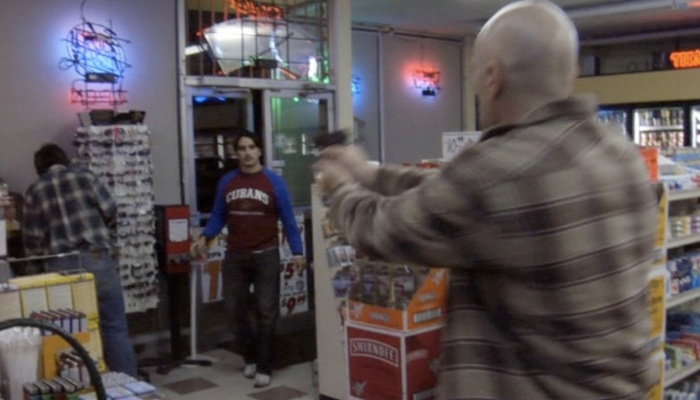 This was my first “short”, as it’s known in the industry.  Basically, a “short” is a short film ranging 10-20 minutes in length which is made with the intention of interesting prospective buyers and investors so that a full version can be shot.

I was very lucky to partake in this short, directed by Robert Fernandez.  In fact, it was perfect timing…. I happened to be on a business trip in L.A.  pitching several advertising agencies for the newspaper where I was Director of Sales.  As fate would have it, I made contact with Robert Fernandez.  One thing led to another, and I was cast as the “customer”.

The star of the short was Jim Hanks (Tom Hank’s brother!!!) and Patrick Pitt.  It was an eye-opening experience… it was my first insight into how film making worked… and Robert (director) is wonderful…. he’ll be famous soon…. he has an eye for photography that brings his work alive.  Check out Robert’s website at www.HappyPixelStudios.com.  Patrick Pitt will also be famous soon…. he’s been a guest star on several major TV network shoes, including CSI.  It’s not bad company to be in, and they are all very inspiring to me.

Thanks for dropping in…

Oh, by the way…. I’m the one walking into the store with the shirt that says “Cubans”…. how ironic, huh?  =)  The bald guy pointing the gun at me is Jim Hanks, and the other guy looking at the sun glasses in Patrick Pitt.