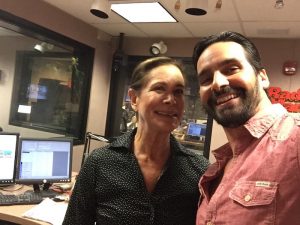 I was on the famous Radio Mambí morning talk show today hosted by Bernadette Pardo.  Radio Mambí is the most popular AM station in Miami, listened to by legions of loyal Spanish-speaking fans.  Bernadette Pardo, or ‘Bernie’ has been a host for years.  We chatted about my roles on film and TV and commercials and working with Vin Diesel.  And the awesome thing about interviews at Radio Mambí… they have pastelitos (Cuban pastries)!!!!!