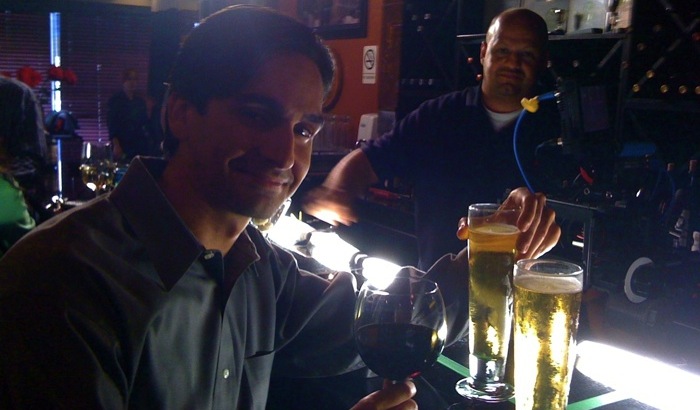 Not a bad day’s work!…  I was selected to be on a commercial for Miami.com, which is owned by a former employer of mine from a past life, The Miami Herald.

For the commercial, there were two scenes.  The first was of friends hanging out at a bar.  The camera glides past us, zooming in on the drinks and conversation. The picture above is this scene.  The funniest thing is that we had a “fluffer” for the commercial… for the BEER of course!  What else would it be for?!!!  So, after every shot, the beer fluffer would put a straw in the beer and swirl in around so it would have fresh foam for each shot.  As you can imagine, we had many jokes to share about that…

If you don’t know what a ‘fluffer’ is… good for you… your life will not be any different after finding out.

The second scene was of two couples on a double date eating desserts… really good desserts.  They put four desserts on the table, including a chocolate mousse ice cream, Crema Catalana (very rich custard) and mango passion fruit bread puddings.  OMG!  They were absolutely phenomenal… but after eating so many sweets for 20 minutes, we were all on the verge of a sugar coma.

The commercial was shot at Chef Adrianne’s restaurant in Kendall.  If you’ve never been, I recommend it… she does a wonderful job and the portions are substantial.