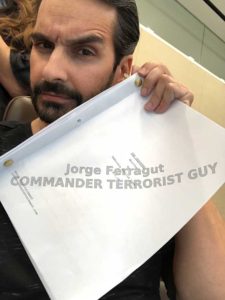 I’m really excited to write that I was invited to be part of a table read at the prestigious United Talent Agency!  As many of you know, it’s hard just to “be in the room where it happens”. So when I was contacted by a producer in my network who asked me to read for one of the lead roles, I was a happy man.  We read a HILARIOUS script written by Gabriela Lugo seated around the biggest marble table I’ve ever seen with 17 other actors. I played the role of “Commander Terrorist Guy” because why wouldn’t I?  I can’t say too much about the project… but I sure hope it gets developed… I’ve never laughed so hard at a table read!