I Was in a Paparazzi Shooting… 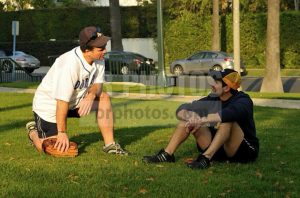 This is the kind of stuff that only happens in LA.  A buddy of mine who lives in Hollywood and happens to be a successful actor, Jim Pitt (recently in Avatar), invited me to play catch.  You see, he’s preparing for a role he recently booked in the sequel to “The Bad News Bears”, the classic 70’s movie about some young misfit baseball players, so he wants to get the ol’ throwing arm in shape.

We met in Will Rogers Memorial Park, which is right across the swanky Beverly Hills Hotel.  Apparently, this is a hot spot to see famous people, so the paparazzi are always near by.

Fast forward 10 minutes after starting to throw the baseball, and Lindsay Lohan’s loser dad shows up at the park with his little dog.  The paparazzi swarm like crazy bees defending a nest.   They snap shots and ask him questions… and he mugs for the camera like a drug junkie desperately needing another hit.

How annoying.  I kinda felt like ‘accidently’ throwing the baseball at him.

Anyway, one of the paparazzi sees JIm and starts heading our way.  They ask him “weren’t you in Avatar?”… he responds yes, and more paparazzi come over.  They interview him, and the he says “and this is Jorge Ferragut”.

Oh crap.  Panic quickly sets in.  Are they going to ask me something, like “what project are you working on”.  Will they run away from me when they find out I’ve never done a scene with anyone famous?  Will they say “oh, never mind, we shouldn’t be talking to you”?

I quickly get over my panic and have some things ready to say, just incase.  So they come up to me and ask “What’s your name?”.  I respond “Jorge Ferragut” and then spell my name.  Then they ask “So you are friends with Jim?”.  “Absolutely” I say.  And then they thanked me and retreated to their paparazzi top secret headquarters near Parts Unknown*.

*** Side Note – When I was little and used to watch WWF wrestling with my dad, they would  always announce the bad guy as being from “Parts Unknown”.  I thought that was a town.  It wasn’t until years later until I discovered it was just a saying WWF used when they didn’t know where the wrestler was from. ***

And there you have it… my first paparazzi experience in LA, or anywhere for that matter.