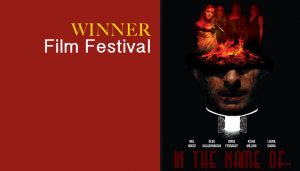 We received great news today! Our film has been selected as a winner at the Hollywood International Moving Pictures Film Festival in the “short film/thriller” category.  The film festival will take place on Jan 7, 2017 at the Raleigh Studios in Hollywood. I especially thrilled to learn this news, since I am the central figure in this ensemble cast.  I play the role of Father Michael, a duplicitous priest with ungodly behavior.  Special congratulations to Olga Kalashnikova for her producing and leadership skills!