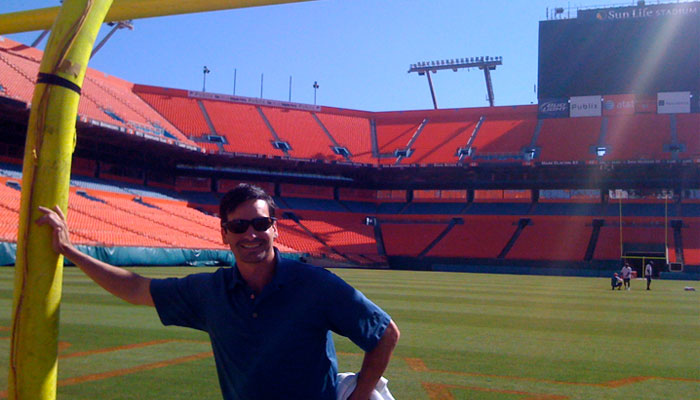 Today, I was able to enjoy a big and empty Dolphin Stadium.  I was hired to do a commercial for a fan handheld viewer thingy that will be used within the stadium.  The commercial will be viewed on the Jumbotron screen in the stadium (you can see one of the Jumotrons in the picture above to the top-right).

It was an easy shoot… only a few hours.  But the cool part was that I got to go walking on the turf!  It felt awesome… and looking up and around, you can only imagine how loud it gets with a stadium full of roaring fans.

They gave me a great Dolphin polo shirt to wear for the commercial… the polo came straight from the “Game Day Store”.  And since it was such a hot day, I sweated through that polo shirt pretty badly.  I thought they would give it to me, since they can’t wash it and resell it.  But alas, they took it back after the gig.  Bummer!!!

So fast forward a couple of weeks, and on Sunday, I get 3 text messages at the same time from some of my friends:

I thought this was pretty cool!  =)