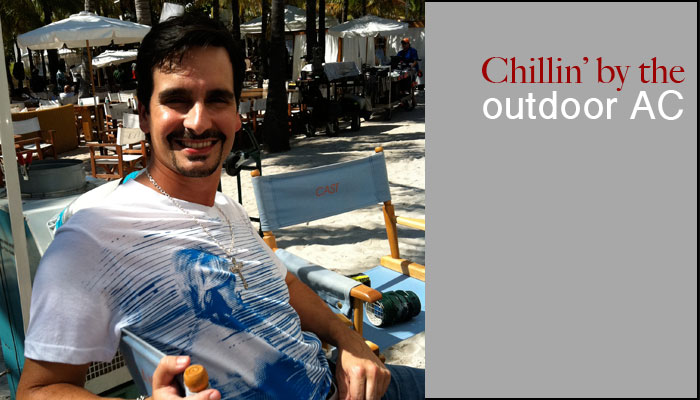 I was thrilled to get the call that I had booked a co-starring role on Charlie’s Angels.  It’s a big deal… not just because it’s a TV show, but because it’s a network TV… those are always tough to book.  You’re often competing with a large number of people… and the network actually approves each casting selection.  So it’s tough.

The work day was awesome… we shot at the famous Ocean Drive beach club called Nikki Beach.  You’ve probably seen it before, because lots of movies and TV shows have filmed scenes there.  It’s really spectacular.

I had 2 scenes… one with Rachel Taylor (blonde angel) and the other scene with Minka Kelly (brunette angel).  They were both nice… not Divas at all.

It really was so fun being on set on a big production… I took a second to look around and soak it all in.  Yeah… I love it.

The heat was worse than usual… there was little breeze, which is unusual for Miami.  The make up and hair on all the actors melted right off.  The picture above shows me sitting in the cast chairs right in front of a powerful outdoor AC… oh, it felt so good!