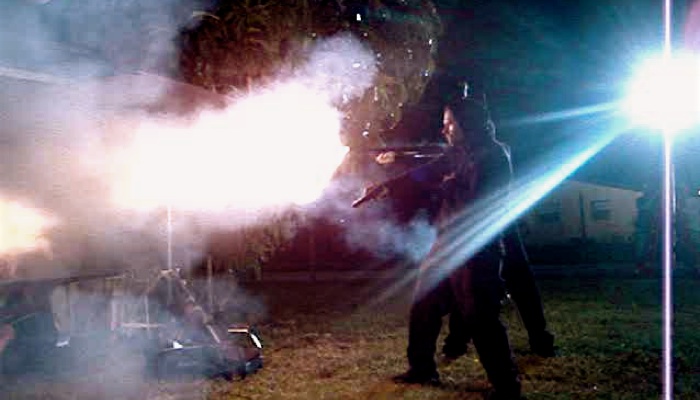 Playing the role of bad guy is fun.  It’s actually a little more fun than playing the good guy ( * At least for now.  I reserve the right to change that opinion!).  I’ve been the bad guy in several roles now, but this was the first time I got to fire a sawed-off shotgun ‘gangsta’ style!

I was cast as “Suspect #1” on America’s Most Wanted.  I’m excited because this will be my first co-starring credit on TV for my resume.  But enough of that… to the fun part!  We had to do the reenactment of 2 murders, so there were guns, screaming, and running involved.  It was very intense… sweet little ‘ol me got lots of compliments from the crew, saying I looked crazy.

Yes… music to my ears!

The show will air this SATURDAY, 9PM EST ON FOX.  Tune in and watch me and Rey Hernandez be the bad guys!  Which reminds me, Rey is a real life cop… and bad ass, you don’t want to mess with him… he has muscles in places most of us don’t have places.  He’s been in several movies, like Bad Boys with Will Smith, where he played a SWAT Team officer.  We are both dressed in black, but hark!, you can easily identify us…. I’m the skinny one, and Rey is the one build like a tank.

So set your TIVO’s, DVD recorders, even VHS if your old school!… and get a glimpse of me playing some alter ego laying dormant deep inside!  juuuuahhhaaaaa (read as evil sinister laugh).

The picture above is of me firing the shotgun… cool shot, right at the moment of the blast.  If you would like to see more pictures of the shoot, click here.