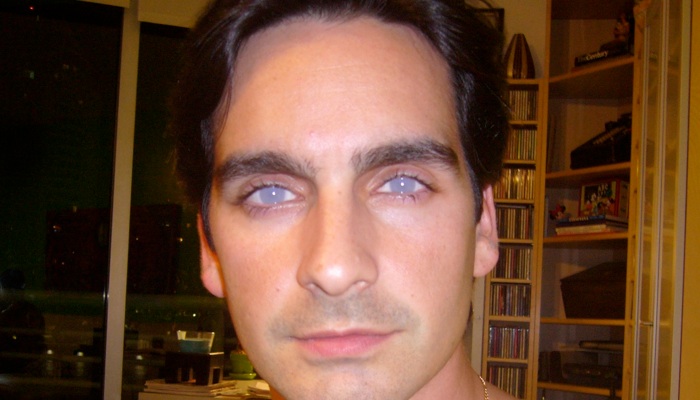 So I was really excited today to receive my “hazy contacts” that will make me look like a blind man for the film I’m doing, “I Reveal”.  I’ve never worn contacts, so I had to learn how to do this, and it wasn’t the easiest thing.  It took me 10 minutes to put the first one in, but as soon as I got the first eye, the second eye was easy.  I wore them around the house for a while to get a feeling of what it’s like to be blind… what an experience.  The contacts allow me to see light and shapes, but it’s hard to distinguish details.  After wearing them for a while, I got a good feeling of what it’s like to be blind.  It’s amazing how your body movements instinctively change to compensate for the lack of sight…. and how grateful I am to really be able to see.

The bad news is that I couldn’t get the damn things out!  Apparently, they are too big for my eyes.  The contact extends about 2-3 millimeters beyond the iris of my eyes (the colored part).  So when I go to remove it, this makes it much more difficult because the contact has more surface area to stick to the eye.  When trying to ‘pinch’ the contact out, it was not use…. it just kept moving around in my eye, but I could not lift it out because it was sticking to my eye.  I put solution to keep my eye moist, and it remained moist, thankfully, but it just wouldn’t come out.  After an entire hour of sticking my finger in my eye with different techniques my wife researched on the internet, I was able to get one of them out.  My wife was able to get the other after much difficulty.  I don’t think my eyes appreciated it much… they were still red the next morning from all the fun…

So I’m updating this a few days after I originally wrote it… and I am happy to report I can now remove them fairly quickly!  I relieved because I really wanted to wear them for the role, but I was truly worried about battling for song long to get them out.  Removing the lenses is all about technique, and I found one that works!

By the way, take a moment now to be thankful for vision… it’s a beautiful thing!